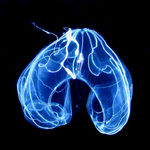 Images of species on the tree have been harvested from the internet by the Encyclopedia of Life project (EoL). We must thank EoL for their fantastic resource, and helpful responses to our various requests. We have only selected images that are in the public domain, or released under a creative commons license that allows reuse if the author is credited (and sometimes requires you to make any changes also available). To see the source for any image, zoom into the copyright symbol next to the picture. The symbol may also serve as a link to the source of the image. Exceptionally, a small number of images have been directly sent to OneZoom: copyright information is similarly accessible via the copyright symbol, and the photographer should still credited in the same manner as for any other image

In the current version, red leaves of the tree correspond to species that are threatened with extinction according to the IUCN Red List of threatened species. Formally, these species are categorised as vulnerable, endangered, or critically endangered. Green leaves correspond to species classified as least concern, near threatened, data deficient or not evaluated. Grey leaves indicate species that are already extinct, or extinct in the wild. If you zoom in on any leaf that has been evaluated on the IUCN Red List, text should appear to indicate which category the species falls into. The categories correspond to extinction risk, which comes under our more general heading of information relevant for conservation.

Common names on the tree have been harvested from the internet by the Encyclopedia of Life project (EoL). To see the original source for a name, click on the species name in the OneZoom viewer, select the EoL tab, and from within that, click on the EoL names tab.

Dates on the tree

Deep dates in the Archaeal stem are taken from Betts et al. (2018) Integrated genomic and fossil evidence illuminates life’s early evolution and eukaryote origin (Nature Ecology and Evolution: 2: 1556–1562. Basal eukaryotic divergences are taken from Strassert et al. (2021) A molecular timescale for eukaryote evolution with implications for the origin of red algal-derived plastids (Nature Communications: 12: 1879. Other dates are taken from The Ancestor’s Tale (2nd edition), which provides a detailed explanation in the endnotes about the dating techniques used.

Additional 'legacy' trees featured on the OneZoom website may use different data and each has its own acknowledgments for data use, in the tree caption and/or embedded in the viewer itself for that particular tree.

The data used to construct the main tree on this site is from a hand-crafted mix of sources, but relies heavily on the Open Tree of Life project, to whom we are extremely grateful. For further, extensive information and references, please explore the tree where the data sources menu item reveals full details about where the data came from. If you are an expert on certain species, we encourage you to contribute data to the OpenTree project.

The OneZoom tree of life is based on a bespoke backbone, originally focussed on vertebrate species, but now extended more widely to encompass all archaea and eukaryotes.

Species have been grafted onto this backbone using a large number of studies of various groups or organisms. In particular, many studies have been collected by the Open Tree of Life project, an ambitious attempt to unify scientific studies into a comprehensive evolutionary tree of all known species of life on earth. This provides comprehensive coverage of approximately 2.2 million species, but the current draft version contains some problematic arrangements of relationships between higher-level groups (we encourage evolutionary scientists to add data to the OpenTree, from where it will eventually percolate down into the OneZoom software).

For added accuracy, and to provide a few divergence dates, the OneZoom site relies on the additional studies listed below for specific areas of the tree of life. Where possible, the OpenTree (version 13.4) has been used to supplement these studies to include most or all currently recognized species. Note that the OneZoom display currently requires all branches to split in two (bifurcations), rather than simultaneously splitting into 3 or more branches (technically known as polytomies). Where polytomies exist in the trees used, the OneZoom software splits them randomly into bifurcations.

This page is only for information on data sources. If you're wondering how to cite OneZoom itself, or wondering about references that weren't data sources, please take a look at our About page

For further details and up to date academic references for OneZoom specific phylogenetic trees, please see the the OneZoom github repository, in particular OZprivate/data/OZTreeBuild/AllLife/. For references used in the Open Tree of Life, see their references page, or consult the references given for each node on their main webpage at https://tree.opentreeoflife.org/.